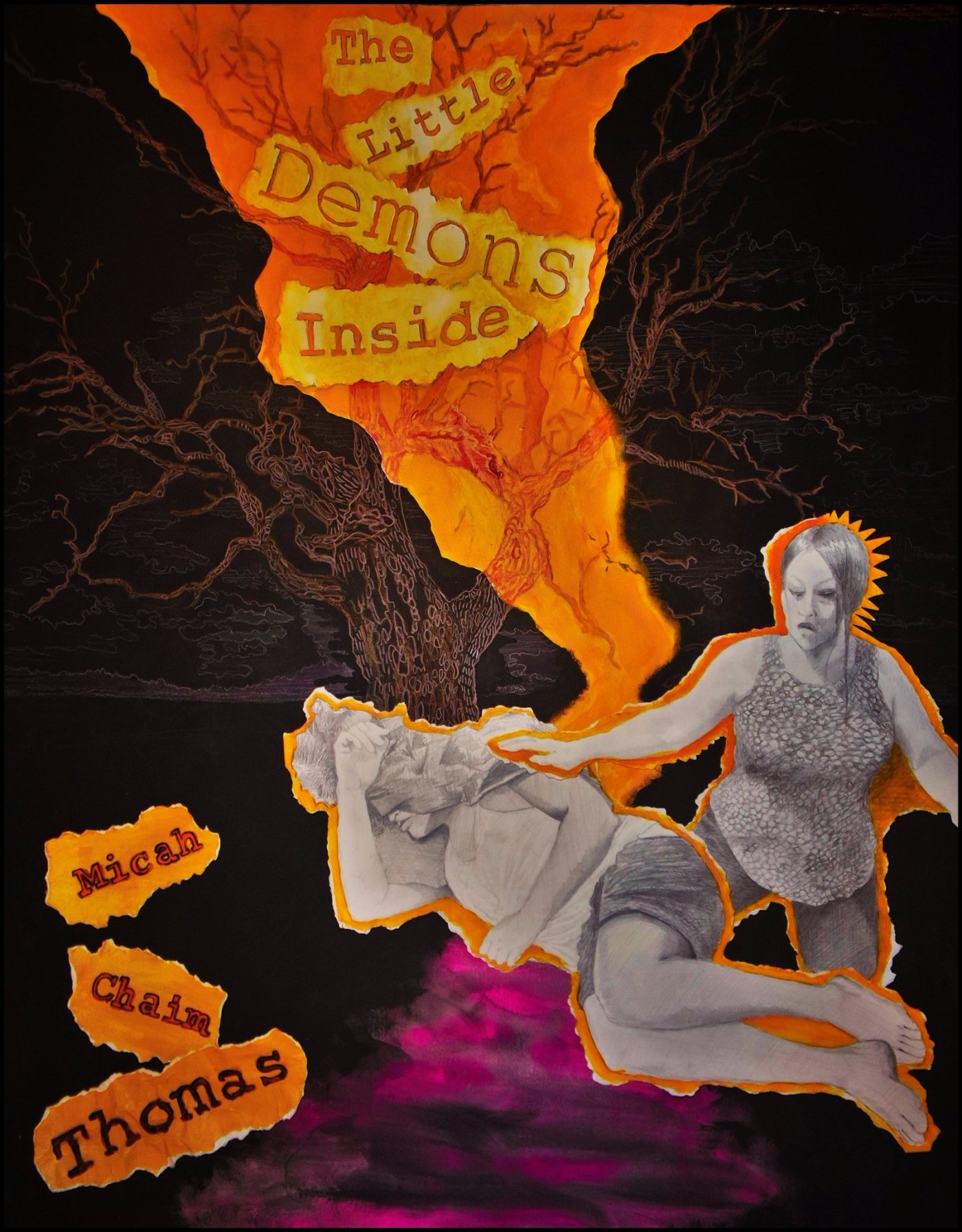 The Little Demons Inside is an intense journey in the genre of magic realism, which has me anxiously awaiting the next book in the series. From the expertly developed characters, to the intricate twists and turns within the story line, Mr. Thomas has created an ultra-realistic world where demonic entities from a realm beyond our own have been invited into the bodies of mere mortals.

On the surface, this is a story about Henry Dolan, a young man battling his uncontrolled pyrokinesis, trying to make his way through a world with nowhere to call home. During a fiery explosion at a gas station in Tempe, Arizona, Henry appears to be having a seizure, prompting Cassie Lima, a young war veteran and hospice nurse, to jump into action and help a man in need. On scene they are questioned by Officer Bill Sanders, who can’t logically pin this disaster on Henry, but can’t drop the connection either. After this brief encounter, all three lives are changed forever. Henry and Cassie recognize a bond between them, and although they part ways, the two never stray far from each other in thought, continually fighting to reconnect. Officer Sanders becomes consumed by a need to rationalize what he suspects about Henry, and how it all fits together with the mysterious Black Star Institute.

But within the layers of this novel, there is so much more. Observances on social injustice, corporate greed, and human compassion fill the pages, thoughtfully without preaching to the reader. This is not a popcorn book, lacking substance, which can be devoured quickly. It deserves to be read slowly, and savored, like a great meal.

At the core, this is a story about people who are broken, whether by their own actions, unavoidable circumstances, or unwillingness to show the world their own truth. This well-crafted tale holds a mirror to us all, and shows how we, as broken people, must continue to battle our own little demons.

Note on my rating: I had a hard time deciding on whether to give this book 3 or 4 stars. While the story is terrific, there were some issues I had with the technical writing in places. I finally settled on 4 stars due to the strength of the story and the characters. Think of it this way, if you find a gorgeous antique, but its covered in dust, it’s still just as valuable.

The Little Demons Inside really intrigued me, and I wanted to know more about this work of fiction and the author, Micah Chaim Thomas. So, I asked him for an interview, and, thankfully, Mr. Thomas accepted.

WS: Where did the concept of the novel come from?

MCT: I had an image in my head since 2009; a fiery queen of heaven descending the sky. I had an idea of how she got there, but didn’t start the novella to tell her back-story until 2016. The rest merged with a few key inspirations, movies like The Fury, Fire Starter, Altered States, and then turned into a full-length novel.

WS: I know you are working on a second novel now, involving the same characters. Did you always envision this work spanning multiple novels? How many books do you plan to release in the series?

MCT: This was meant to be an introduction novella, but has already sprouted a novel, 2 volumes of related short stories (1 released and 1 in progress), and a sequel… I think maybe 3 novels will do it, maybe?

WS: What do you hope readers will take away from the first book?

MCT: The surface takeaway is ideally that the story was fun. Beyond that, perhaps, a theme of love and human connection helping us deal with our damaged parts, our sense of unworthiness that manifests vulnerability as anger.

WS: What other themes do you plan to explore as the series progresses?

MCT: The next major theme is taken from a philosopher named Slavoj Žižek, and his thoughts on ideology and how getting what you want can often be a nightmare. Of course, there’s dozens of other issues at play, criminal justice and narcissism culture to name a few.

WS: When did you realize you wanted to be a writer?

MCT: I’d written poetry and dirty little short stories as a teen. When I was 18, I went to Los Angeles with a couple of friends, with only several hundred dollars between us. After some time, and some weird times, I found work writing treatments for an indie filmmaker. He bought me Syd Field’s Screenplay and I critiqued drafts until I knew how to write. Though it didn’t last long, I had a taste. Life happened, and I started writing seriously again in 2016.

WS: Your background with scripts certainly shines through in your ability to show, and not tell, the experiences of the characters, as well as the descriptions of the landscapes. For the scenes set in Arizona, I almost felt the dust in my teeth, and for those set in Seattle, I could feel the cold damp rain chilling my bones. What steps do you take to ensure a visceral experience for the reader?

MCT: There’s a lot of material produced that never touches the page. Sketches, reference photos, playlists, Pinterest boards, beta reader feedback – I take all this in and try to inhabit a scene or moment as fully as I can. Often this means having three or more versions of the scene until it feels right.

WS: One of my favorite scenes is when Cassie was in Sunset, looking for clues to Henry’s whereabouts. The details you included on the ostrich convention and the flea market, were very real and involved all the senses. What was your favorite scene to write?

MCT: I felt, at times, that Cassie’s story could stand alone. Strip out Henry and anything paranormal, and I might have something that passes the Bechdel test about a woman finding herself. I’d say my favorites were probably everything Cassie.

WS: The Little Demons Inside fits well within the very rich, but often overlooked genre of magic realism. What drew you to this genre? What does ‘magic realism’ mean to you?

MCT: From a writing perspective, magic realism made a good fit for a parable-like narrative style. I wanted a world where there wasn’t special knowledge, despite the occurrence of special things. Magic realism is a literary fiction genre where absurdism, social critique, and the real can converge. There’s a freedom there where your story can be less literal and more symbolic.

WS: You’ve said that your biggest writing influences include Emily Brontë, Audrey Niffenegger, and Stephen King. What authors you would suggest as an introduction for new readers to the genre of magic realism?

MCT: I’ve been a fan of the genre for years, with authors like Gabriel García Márquez, Jorge Luis Borges, Richard Brautigan, and Audrey Niffenegger.

WS: And lastly, I’m interested to know how you decided to launch your writing career as an indie author. What lead you to self-publish? Is there anything you would do differently, with respect to publishing, for the next installments?

MCT: It boiled down to control and speed. With the first book, I did not want to make any compromises, and I wanted it out in the world in the same year it was set. For the next time, I’ll be making a bigger investment in editing and formatting. There was a wall, a limit to what I could do on that front [for the first novel] in those hours after my family goes to bed, but before the sun comes up.

I’d sincerely like to thank Micah Chaim Thomas for taking the time to speak with me. I hope you enjoyed this interview, and if you would like to know more about the author and his works, feel free to connect with him on the following social medial platforms:

J.A. Sullivan is a horror writer and paranormal enthusiast, based in Brantford, ON.